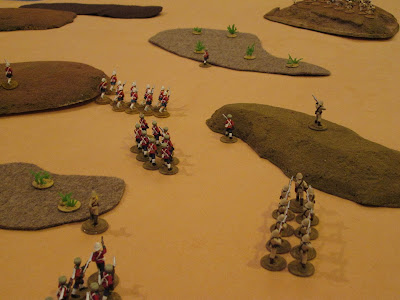 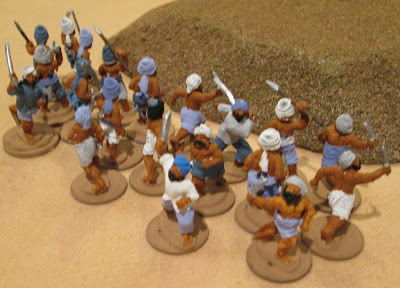 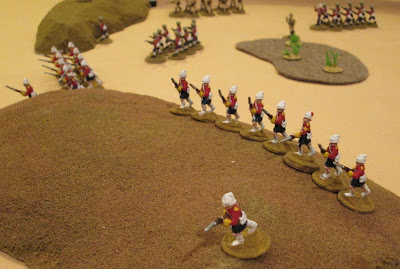 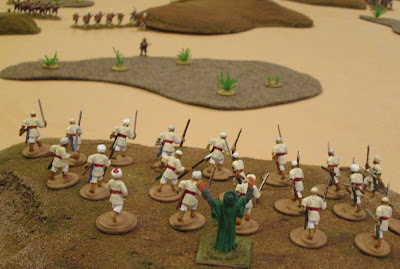 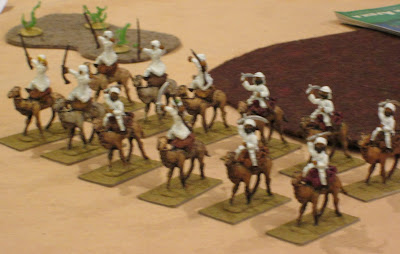 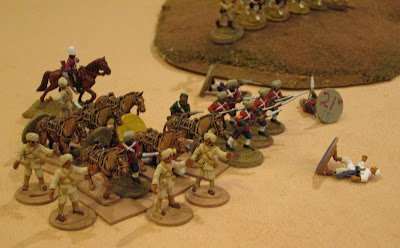 We are supposed to play the first battle (Vile River vs Alghaz) tonight.  I'm waiting for the guys to arrive as I type.

May saw both a substantial battle (see here) in the Tyger; and a small skirmish on the Cango as well as a few mishaps here and there.


Above you see the map and each of you needs to decide where to go next.  Remember that you can:
So where do you want to go?  Remember the higher the "Rebellion Index" is, the more volatile the province.

Following are the current Rebellion Index for the various districts:
The following "codes" will be in effect -- and the die roll in parentheses indicate how many points the Rebellion Index will rise each month if not visited:

The Tyger River forces took a severe mauling in their successful campaign to bring peace back to Ta'ish . . . but in doing so the following perished:

Also this month, the Cango River forces fought a sharp skirmish against the natives of Derf Province with three fatalities (and a few wounded) amongst its forces:

Capt. McMurdock's Vile River Command managed to quell the upsets in Dinga without fighting . . . but the 92nd Highlanders lost Pvt. David Sinclair, who was carried off by a fever.

Finally the Wazu River Forces were successful in calming matters in Likaz without the loss of any life . . . however Sepoy Rasgur (15th, #16) passed away from prior serious wounds.

Lt. Neil Cosgrove, 21st (#1):  commanding 21st MNI was evacuated to Kyro, but his head wound worsened to "serious", then improved to steady . . . and now he has been deemed eligible to return to duty.  Currently in Kyro.

Last night Rob came over to learn how to play "The Sword and the Flame" colonial rules.  I had him take over the Tyger River District forces and he attempted to bring peace to the region of Ta'ish.


Above you can see the rolling terrain faced by Capt. Robert Farrier (who had replaced Capt. Peter Webley-Grant, when he was recalled back to Blighty).

On his left, Farrier deployed his platoon of Sepoys (45th BNI -- Ratray's Sikhs) in open order; next to them, his squad of Scots (78th Ross-shire Buffs -- which would later be known as the Seaforth Highlanders) in column;  behind them was the mule train (with wounded); a squad of Gurkhas (2nd) were in open order (with Farrier and Lt. Pete Kipling behind them); and finally on the right his platoon of British (88th Connaught Rangers) in column.

The small village ahead of them has been the focal point of rebellion in Ta'ish and Farrier's mission was to raze the village.


The Tyger River forces walked into three ambushes . . . but the Dervishes lacked the commitment to carry them into the British.  Nevertheless there were  far too many "ones" thrown by Rob as British and Colonial casualties mounted.


Of course the Natives took the worst of the damage and were eventually driven from the field . . . but with too many British forces falling to the enemy.  Then they reached the village:


Eventually the Hill Chief was severely wounded and enough of his riflemen slain that the rest turned tail and ran, so that Captain Farrier was able to raze the village and to stabilize the region (at least for now).

But the "butcher's bill" was way too high.  He entered the valley with about 60 men . . . and there were 21 dead and an additional 15 wounded.  Worst of all, it was the unit leaders who suffered the most.

Lt. Pete Kipling (Farrier's 2nd in command) was slain late in the battle after he had assumed command of the 78th after Lt. Christopher Stewart fell in action.  Also perishing was Lt. Hiram Peterson, commander of the 88th.

In addition, senior NCOs Havildar Dey of the 45th and Havildar Rawal who commanded the Gurka's were slain, as well as ten "other ranks".

Throughout the action, Gurkha Rai (#4) was outstanding and has been promoted to Havildar and assumes command of the few remaining Gurkhas.  We should note that with three dead and four more wounded, the Gurkhas, while willing, are not presently combat-ready.

With nearly 60% casualties, Capt. Farrier is expected to "take to the river" in order to get his wounded to Belhi for his June move.

After a long delay (due to various illnesses), I am looking to revive my Afristan Campaign after about a five-year hiatus.

Above you can see the current state of the mysterious mini-continent knows as "Afriboria" as of the middle of May, 1876.

Working "around the clock" starting with the upper left, we have:
I will undoubtedly tweak a few things before the re-start (probably early next year).  Right now, each District has one "Field Army" (indicated by coloured squares).  The higher the number for a territory, the closer it is to becoming "rebellious" . . . and that is bad.

I know that it has been a year and a half since I've posted here . . . and I'm sorry for that.

For those who don't know, not long after the previous post, I started hemorrhaging and after a number of tests and procedures it was eventually determined that I had a cancer.   Radiation followed, then eight hours of surgery and 20 days in hospital followed by six months of chemotherapy (ending in February).

The latter left me with extreme fatigue and no stamina.  I am feeling much better now . . . but nowhere near what I was prior to over a year of being a complete invalid.

On top of that, I had 17 teeth removed about a month ago and am waiting for cataract surgery for both eyes because my vision has deteriorated greatly.

All-in-all it has been a rough year and a half . . . but as I wrote above, I am feeling much better.  Still it will be some time yet before I will be up to resuming this Colonial campaign . . . but I do intend to do so, hopefully later this year or early next year.

Newsflash -- Peter out of Surgery

Good news . . . I just heard that Peter has successfully come out of quadruple bypass heart surgery and is now resting in the hospital's CVU* recovery.

UPDATE -- Peter will still be unconscious likely for another 8 hours or more. He will likely be in the CVU* post operative ward until Wednesday, then if he is breathing well he will be moved to the Patient Care Center for some days depending upon his condition.

A sincere "Thank You" to all who sent prayers or other forms of positive energy.